Oh man…it feels like I’ve been blog-less for so long. No one told me this would be addictive!

Anyway, if you’re reading for the recipe, feel free to scroll right to the end. But if you’re here for weekend, eats stay tuned, because there have been  some darn good eats these 2 days! Here’s a preview of the birthday cheesecake I baked for my favorite roommate Kali!

Let’s start from Saturday. To prepare for the potluck dinner that night in celebration of Chinese New Year and my roommate’s 23rd birthday (which her boyfriend organized for her), I went on a field trip to get me some ingredients. First stop, LUNCH of course! Nick was craving Pho, so we headed to Argyle Street (a mini-Chinatown in Chicago) that is famous for their Vietnamese restaurants.

The only Pho place I’ve been to is “777”, but wanting to be adventurous, we walked into a bustling restaurant called “Le Pho“. It might not have been the smartest decision I’ve ever made in this lifetime.

We started with a boba-free Taro smoothie. (Taro is another thing I’ve had a childhood obsession with) mmmm…This drink was super refreshing, but really thick and almost gritty. There was a strong natural taro aroma as if they had ground up the actual root with ice and sugar. (as opposed to the regular artificial taro flavoring we get from Joy Yees Restaurant, which is yummy too)

I ordered a Seafood rice noodle soup that had thin ho fun noodles. There are 3 kinds of balls fish and 2 fried fish cakes. 2 pieces of shrimp and a few cuttlefish. What actually made the broth great were the fried garlic that topped the dish. 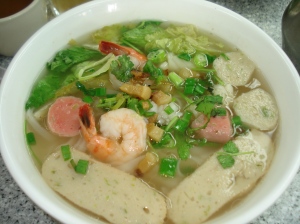 To be honest, I was a little disappointed with the flavors in the dish. None of the ingredients actually stood out (fish balls and fish cakes were frozen. It was obvious) apart from the fried garlic. The ho fun was slippery and greasy, the way it should be, but it was mislabeled in the menu. These are not rice noodles!! (Beware rice noodle lovers!! Ho fun are “greasy” noodles because they were greased in between sheets with oil to keep from sticking to one another. Rice noodles on the other hand are completely dry and oil-less)

Nick got the traditional Beef Pho.

Below is one of my favorite appetizers ever! Vietnamese Spring Rolls/summer rolls. Not deep fried, but wrapped in rice paper. 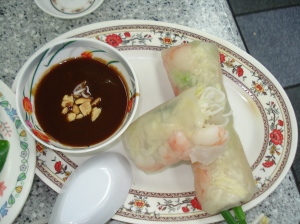 Again, this wasn’t a well-made roll. Compared to the ones from 777, this emaciated roll was not stuffed full with fresh herbs (basil, mint) or bean sprouts. Instead, it had a layer of thinly sliced shrimp, a spring onion, and mainly stuffed with rice noodles. There was so little filling that the wrapper came around the fillings TWICE. All I could taste was the skin, and had to drench the roll in sauce to give it flavor.

Overall, this restaurant gets rated a 3 out of 5 for flavor, 2 for service, and 3 for value. Ummm yeah, not coming back.

Moving on, we went to my favorite grocery store in Niles…HMART!!! We got some Korean chicken wings from a stall there despite attempting to resist the aromas.

I found the entire fridge isle full of tofu shirataki noodles!!! Yay! For $1.29, you can get the Hungry Girl endorsed noodles. But for $0.99, you can get authentic JAPANESE ones!

I bought 3 boxes of strawberries for $0.99 a box!!! woohoo!!! And I also got tonnes of produce for my big valentine’s day dinner cook-off with Nick. muhahaha. Nowadays, it’s all about not eating out when restaurants jack up prices  man…

After I got home, I finished decorating my green tea cheesecake (which cooled for 6 hours in the fridge while we went shopping) and headed over to the party! There were way too many people to be taking pictures of every dish (AWKWARD) so here is a pic of one table full (imagine this times 3 with different dishes).

I thought you’d enjoy my “round 2” dish picture but it’s super blurry. My first round disappeared into the gut about 4 minutes BEFORE I remembered I had a camera. Ooops.

Here’s birthday girl with a red scarf for CNY-ness. Yeahhh I got her while she was chewing. 😛

Despite eating 4 rounds at the buffet station (the plates did get progressively smaller though), I still had room somehow for dessert. Check this out!!! My friend Jackie, who is known as THE baker amongst my friends (aka the 2nd year med school students) made a traditional Chinese Fresh cream and fruit cake.

Dang, what a mouthful.

Taste-wise, I had RAVING reviews at the party (wahoo!) and people were trying to find out who had made the green cake. hehehehe. My roommate said: “OMG you have to put this on your blog!!” (She found out about the blog that night)

Method: Combine all ingredients in a bowl and press into bottom of a 9 inch spring form round pan. Bake in a 350 degree oven for 9 minutes. Let cool before filling.

As you can see, I totally made up the design of the cake. I used 2 biscotti‘s I’d baked beforehand as a centerpiece. On the edges, I dotted red icing and stuck halved macadamia nuts on top. Finally, I drizzled Hershey’s dark chocolate syrup over the cake to tie together the cake and incorporate the chocolate crust “idea”. 🙂

Feel free to send me questions or comments!! Here are some pictures I can share of the process. 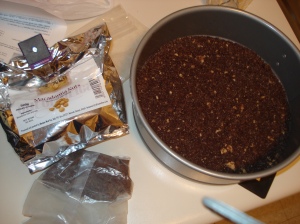 Crust pictured with some of its components

My matcha powder from Taiwan

*Note* I literally had to buy and bring this to the US from Taiwan because 1) It is super hard to find the extra-fine powder in the US, and 2) It it way too freakin expensive here (I saw it at Whole Foods for $30+ (the non-organic kind too!))

Cream cheese mix in 1 bowl, matcha mix in another

The final product again from a birds eye view after it was decorated. 😛

Anyway, I figured this is a long enough post and I shall just end it here. 🙂 Can’t wait to see what everyone else was up to this weekend!!!