Low and behold, the funnest Saturday brunch I’ve had in a while with the brother and the boyfriend this weekend! Thank you Chicago Restaurant Week!

$22 per person for a 3-course fixed-price menu

Firsts: A private NoMi-exclusive elevator takes you up to the restaurant entrance where 3 hostesses awaited us. As soon as we got off the elevator, we were offered to have our coats taken to the coat room (Which we declined). They found our reservation very quickly and led us through a small wine cellar and into a casual lounge and bar area. After weaving through multiple plush lounge couches where a few casual diners sipped cocktails, we entered a large open dining area. A sushi station was placed right at the entrance where two chefs worked diligently to create sushi and sashimi.

Decor: Modern whites and blacks was the color scheme that dominated the room. There seemed to be an endless stretch of square and rectangular tables packed very closely together. We were seated near, but not right at the full length window that overlooks Michigan Avenue, Lake Michigan, and a glimpse of Navy Pier in the distance. Gorgeous and contemporary decor, yet slightly cramped was my overall impression.

We sat down at a table for four and were asked twice if there was a fourth person joining us before the extra place was removed. No biggie. I was particularly amused by this salt and pepper “dish” at the center of our table and asked the waiter to kindly explain to us its contents. Check THIS out.

The UPPER 3 brown/red sections are all peppers:

To LOWER 3 sections are all salts:

How to eat: We decided the best way to try out the flavors was to swipe some butter on the bread and sprinkle it with a different salt or pepper.

The Bread Basket (Unpictured): Contained 2 small white bread rolls that had outer layers SO tough the boys had trouble even pulling the bread apart. It also had 3 raisin sultana walnut bread rolls that were much more manageable to pull apart and enjoy. It was a hit at our table after the disappointing white bread rolls so we asked for a second basket of just the raisin rolls.

I started off with an intruiging apple chicken soup that came in a very flavorful, well-seasoned broth that reminded me of traditional Chinese chicken soups. There were small cubed granny smith apple pieces and chicken that was cooked so tender it was in strands and threads inside the bowl. The beet salad was a huge hit with all 3 of us because of how fresh and sweet it was. A perfect complement to the soup!

My brother Jeff ordered the pumkin coconut soup, that none of us were too excited about. After tasting his soup, we all agreed that the soup should be renamed to “curry coconut soup”. It had a mild curry flavor that probably masked the pumpkin’s even more subtle flavors. His soup went perfectly with the “too chewy” breads and he enjoyed his soup by soaking the rolls in it rather than drinking it with a spoon. Overall it was a hit with all 3 of us!

Nick ordered the last soup on the menu, the miso soup. He wasn’t so excited about ordering this because it was so “typical”, but because he wasn’t a fan of pumpkin and I was already getting the apple chicken soup, he decided to test out the last choice on the menu. He described his miso as “high quality miso” with a strong (well-salted) flavor. However, it was nothing special and after tasting the pumpkin soup, he decided if he returned he’d rather get the pumpkin soup because he LOVED the curry spices in it (and no pumpkin flavor at all)! 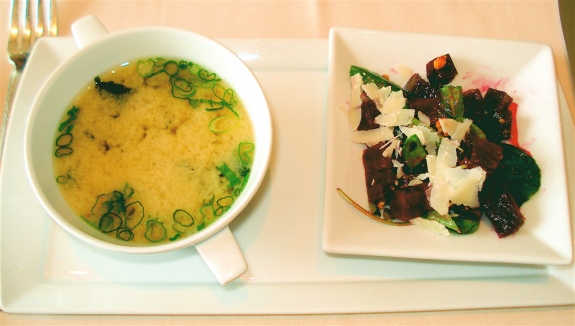 Knowing that NoMi had its own sushi bar, I wanted to try the Japanese sushi and sashimi platter. It pleasantly surprised me when my dish came with freshly ground wasabi (which I used up COMPLETELY) and pickled ginger, which the waitress even kindly refilled for me. The ginger was sweet, rather than spicy like many of the other kinds I’ve tried. I was also amused by the double ended chopsticks. 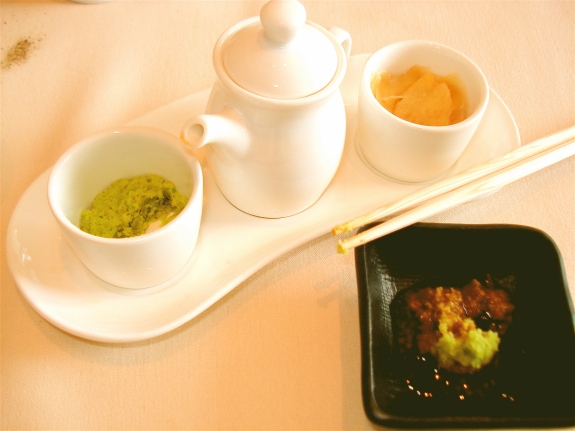 My dish was gorgeous. It came with 3 pieces of sashimi (2 Salmon & 1 white fish), 8 pieces of California Roll stuffed with fresh crab meat and avocado. (All the roll was missing was the crab roe and tamago Japanese egg omelette that comes in the California traditionally) There were 3 pieces of sushi with 1 shrimp (my least favorite), 1 eel (YUM! My favorite), and 1 tuna. While the fish were all very fresh, they came in slices cut much more thin than I’m used to.I polished off the ENTIRE plate including the daikon radish strands.

The brother ordered the crab cakes. This was a HUGE winner with the guys as the crab cakes were literally stuffed full with fresh crab meat flakes. The breading appeared and tasted like finer panko breadcrumbs, and the 2 cakes sat on top of a sweet whole grain mustard sauce. According to Jeff, this was a filling and very satisfying entree.

Nick ordered the catch of the day, which happened to be Mahi-Mahi. Although it was cooked to perfection, the potato puree was “great”, and the spinach was so tender Nick chose to call it “baby baby spinach”, he was disatisfied with the size of his dish. It wasn’t enough food for a “grown man” like him, and he thinks that if we return he’d most likely get the crab cakes.

I went for the trio of sorbets, that I have always loved. Being a huge fan of the tart and cold ice-creams, this was the perfect dessert for me but the flavors came a little flat of expecations. Although I truly enjoyed the tropical fruit and berry flavor, the spiced pear scoop left me disappointed. All I could taste in the spiced pear sorbet was sugar and an overwhelming amount of “spice” that reminded me of a spice rack gone wild. Each was served with it’s own “cookie” – a lemon shortbread, a caramel tuille, and a sweet, crunchy espresso sheet. None of the 3 sorbets were memorable or a stand-out by any means. 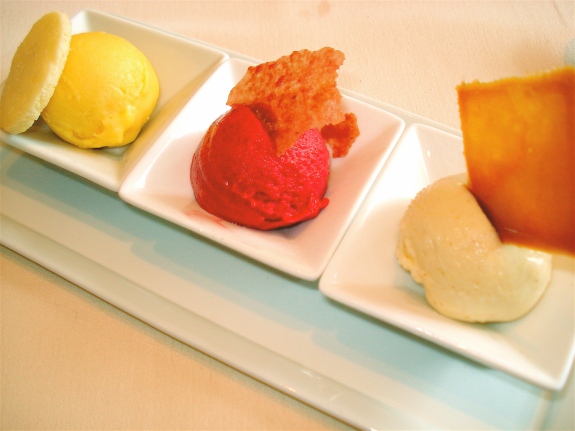 Jeff got a wonderfully fluffy carrot cake. It was 50% cake, and the other 50% a light lemony cream cheese mousse topping. My favorite part was the tart maple orange sauce that complemented the cakes sweetness with a kick. Overall, the cake was “tasty” but forgettable. 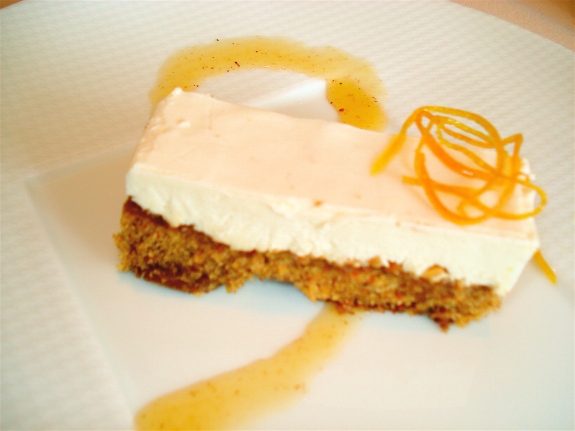 Nick went for a caramel ice-cream wedged between two french macaron cookies. Although I am a GIANT fan of macaron’s, NoMi’s larger-than-usual cookie was far too chewy for my liking. I wished for a more airy, fluffy, and less chew-intensive macaron. The ice-cream itself had large brownie pieces wedged throughout, but by all means, this dish was far too sweet and dense to win my love. 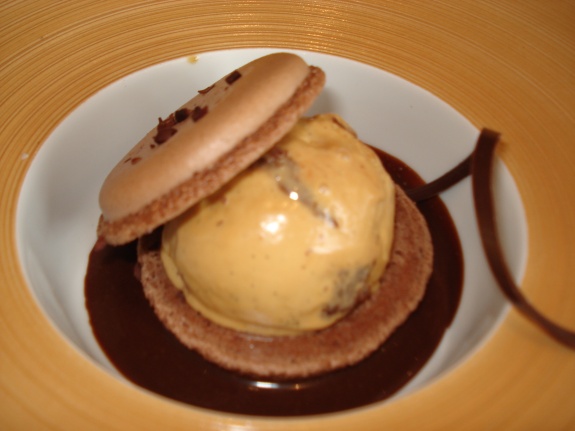 After I paid the tab, which came out to be $80 for 3 people including tax and tip, the waiter arrived with an unexpected petite four dish that contained: 2 lemon pound cake pieces, 2 chocolate filled milk chocolate domes, and a soft, chewy walnut candy. I was the only one who tried anything on the dish, going straight for the chocolate. Its shell was SO thin the whole chocolate crumbled and melted on my tongue in one bite. Yum!! The cake was nothing special and I regretted even taking the piece. Overall, still a nice thought and end to the meal! 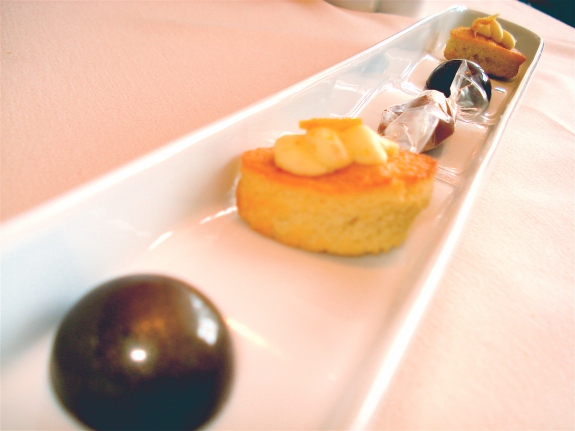 Taste: 4/5 (Pleasantly surprised in many ways, but also disappointed in quite a few dishes)

Originality: 5/5 (The beet salad, macaroon and ice-cream, and the “twist” to most of the dishes impressed us)

Happy Diners! Me & The Brother

Jeff: “It was SO good. I’m SO satisfied.” (and he goes home to call my parents in HK to gush all about his wonderful sister)

Nick: “It was GOOOD. But my fish was too small. If I go back, I’d get the pumpkin soup and the crab cakes.”