Even after a full 3 course (maybe 5-course with the 2 bread baskets and petite four’s) NoMi, the Chicago weather made Nick and I quickly crave something hot and soothing…and Asian. Plus, the poor guy wasn’t full from his little fish dish, so we headed over to Chinatown in the afternoon for a snack and found ourselves in a Taiwan-based chain tea house called Saint’s Alp Tea House!

First Impression: We’d been here before but had gotten drinks to go. This time we were seated by a waiter that I came to dislike. I was guessing that this Cantonese man-boy felt superior to us mandarin-speaking Chinese kids. Growing up in Hong Kong, I’ve encountered many experiences where I’ve tried speaking Cantonese sometimes and Mandarin at other times just to see how I’d be treated. Experience tells me that you should only speak Cantonese to a Cantonese server or he’ll more likely than not, but RUDE to you if you speak mandarin.

Between the two of us, we got a hot taro bubble tea (large) and a sweetened ginger black tea (small).

The taro bubble tea was DELICIOUS thanks to the strong artificial taro flavoring that Nick and I actually love. There were very few tapioca balls, but the super-sweet and taro-ish drink treat totally made up for it. The “tea” was creamy and satisfying – perfect to sip while watching the crazy snow storm outside. 🙂

The ginger black tea was extremely spicy and very strong. Luckily, they added plenty of syrup to counter the spiciness of the ginger, or this drink would not have been finished. It left my throat and tongue with a slight burning sensation at the end of it, and I kept saying “My mouth is on fire!!”. But hey, the drink did its job and gave me a good dose of caffeine kick! 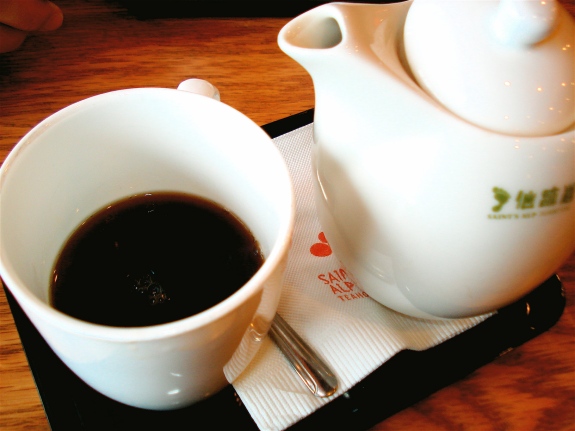 We ordered a contemporary Taiwanese snack dish the comprised of deep fried soy-sauce marinated chicken wings (x3), deep fried fish balls (x2), and soy-sauce braised eggs (1 egg) (and my favorite)! The eggs were so flavorful and well-cooked that even he egg yolks absorbed the sauces and melted in my mouth, rather than “clogged” my throat with dryness. The chicken wings were leaning toward the salty side, but the skin and meat fell off the bone when you bit into it. Though I didn’t try the fish balls, I don’t think the boyfriend was all that impressed with them. Pretty average tastes, not bad, but not great.

Overall: 3.5/5 (Sub-par service does not put the “pretty good” food too high on the rating scale)

Originality: 3 (Average. You can get all these dishes in Taiwan, but not in many Chicago places)

Value: 4/5 (Good for students. Not ridiculously cheap, but affordable)

Service: 2/5 (SUCKS. The waiter gave us attitude, then messed up our food order and tried to make it sound like we said it incorrectly.)

I would totally go back for the drinks, but next time, “to go” is the way to go!!

After our tea time, Nick and I proceeded to visit the Chinese bakery to pick up some Chinese egg tarts, a hot dog roll, some paper-wrapped sponge cakes, and ADVENTUROUS nick decided to listen to my taro bun recommendation!! Yay! I love when my boyfriend listens to me. (Pics coming soon!) We then proceeded to go home and make turkey chili for dinner (which came at 8pm) and went to play taboo at a friends apartment.