Larabar says: “LÄRABAR is a delicious blend ofunsweetened fruits, nuts and spices – energy in its purest form. Made from 100% whole food, each flavor contains no more than six ingredients. Pure and simple, just as nature intended.”

The wonderful Lewis at Larabar sent me a variety box of Larabars along with a t-shirt after featuring me on the Larabar blog –> check it out here!! 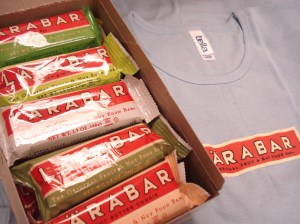 If you’re new to LARABARs, here’s a simple highlight:

Michelle says, “I really love the lack of crazy ingredients in the bars but that they can retain such wonderful flavors! But I also wish it were slightly lower in fat and higher in protein!!”

Having already tried the peanut butter cookie and cinnamon roll (my favorites) and actually disliked the cashew cookie, I sort of had an idea of what my Larabar was going to look like, but by no means was I ready for this!

LARABAR says: “Holy Môlé! – This bar’s distinguishing ingredient, chili, boasts a subtle, gradual heat. The unexpected combination of spicy and sweet is perfect for indecisive types looking for a nutrition boost. Cocoa Mole packs antioxidant-rich cocoa, protein-loaded almonds and the Omega-3 superstar walnuts, all which contribute to 20% of daily fiber requirements. This ‘hot’ chocolate will have everyone singing ‘OLÉ!’

First Impressions: Appearance-wise, it is exactly what I expected, smooth, shiny, and not sticky at all. I didn’t get the strong whiff of sweet aromas that were present in the cinnamon roll & PB cookie flavors and was a tad bit worried it could be a bland flavor.

Flavor: The first bite was fruity, it was a condensed and slightly savory thanks to the dates. I was worried that I wouldn’t taste the cocoa nor the mole (Mole means “sauce” or “concoction” in Spanish, according to wiki). The second bite I began to taste the smoky subtle undertone of the unsweetened cooca powder that was slightly masked by the nutty walnut flavors. Mmmm, I’m curious for more now. The third bite, my tongue is starting to get a little warm from the chili spices baked into the bar. I could get used to this! The fourth bite, I’m hooked to the crunch and the heat!!!! By the end of the bar, my mouth was hot (and boy am I good at tolerating spicy-ness), my tummy was satisfied, and I knew my body was fueled for a sweaty cardio workout.

Texture: This is a firm and dense bar that holds its shape well. I like to “break” pieces off my bars bit by bit, and this moist bar didn’t crumble under the pressure. It has that crunchy-ness from the UBER-plentiful scatter of walnuts, but the almond pieces got stuck rather easily in the cracks of my teeth, which was slighly bothersome.

Overall: I loved the mystery of this flavor and the natural yet exciting progression of flavors going from one bite to the next. It is for anyone who likes to kick it up a notch with a bit of heat, but don’t expect to feel like you’re indulging in chocolate. Cocoa mole is definitely more fruity and nutty. My only wish was that the almond pieces would stop getting stuck in my teeth and that there  “lighter” in calories. Otherwise, this is the best and only spicy bar I’ve ever had and I will DEFINITELY reach for it again!!

*Disclaimer* My biased judgement may come from the fact that I have always HATED dried, flaked coconut. *Cough* OVERHYPED. *cough* (I can do coconut juice and coconut milk for sure though. Yum!)

Taste: I was SO glad this wasn‘t overly sweet, nor did I feel like I was eating sunblock. The coconut flavor was mild and came mainly from the infinite shreds of coconut bits weaved throughout the entire bar. The date-flavor was NOT as dominant as in other Larabars, (so this bar wasn’t too fruity), but overall even though I didn’t hate it, I won’t be reaching for it again anytime soon (though I can see coconut lovers going ga-ga over this).

Texture: It reminded me 120% of a Chinese bakery coconut bun filling – it’s called the cocktail bun. Everyone who loves soft sweet bread who also loves this flavor of Larabar will also ADORE this…

Basically, the texture was dense, soft, moist, and a TINY bit nutty from the walnuts. The most the dominant texture came from the dried shredded coconut bits that were fresh & crisp, but had this might-get-stuck-in-your-teeth sort of gritty chewiness (that I am not a fan of). 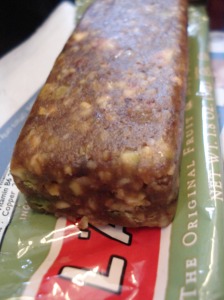 Mini-review: SOOO moist, so soft, but really not as sweet as any of the other flavors (i.e. apple pie, coconut cream pie) I’ve tried. The pistachio flavor was really light but definitely present. Tasty tasty!

Taste & Texture: Quite tasty. I’m glad this isn’t overwhelmingly coconutty nor is it too chocolately. As nutty as usual with the little pieces of walnuts but definitely a tad too dry for me. A flavor I’d probably buy AFTER the cinnamon roll Larabar. 😛 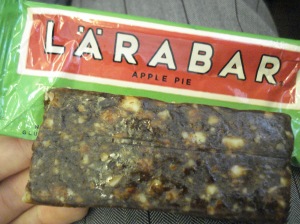 Taste: This smells like and apple pie and SORT OF tastes like an apple pie, but because of the plentiful nuts inside the bar itself, you really taste a lot more of the walnut flavor and texture rather than the full dessert/pie overly-sugar-laden experience. That being said however, I do like the flavor a lot as the fragrant unsweetened apples and nuts really give this bar a lovely natural aftertaste.

Texture: This is a soft and almost crumbly bar, which wasn’t as moist as the cocoa mole or the coconut cream pie. You get some chew from the dried apples, which are in very small bits, and lots of crunch from the pieces of walnuts and almonds.

Overall: 8/10. Nutritionally, not HALF as bad for you as apple pie. Flavor-wise it’s fragrant, fruity, nutty, but not overly sweet. The crunchy nuts in the bar remind you that this ain’t no apple pie.

Flavor: This bar honestly tastes like a more fibrous, less greasy, dense slice of banana bread that has a kick of acidity/tartness (from the dates). It’s not an overly sweetened bar, yet is still filled with a light banana scent that wasn’t overwhelming till the very last bite. I really don’t taste the dates apart from the slightly tart flavor that it adds to the bar.

Texture: Firm, dense, JUST moist enough, and super studded with pieces of almond throughout the entire bar. This offered a nice textural crunch, along with a chewiness that comes with the date base.

Verdict: 8/10. I was pleasantly surprised that only 3 ingredients can make up such a yummy tasting banana  bar. Though it tastes like slightly sour banana bread, the dense nutty texture quickly reminds you that this ain’t no greasy muffin. A great snack for sure!

Tastiness: I definitely didn’t expect the cherry pie to be as tart as it was, so I was not prepared! This cherry pie bar was good, not great and not memorable for me. I’d probably not buy this one on its own, though I know a lot of people love the cherry pie flavor. I’m a HUGE fan of fresh cherries, perhaps that’s why I can’t seem to get over how different – the nutty and fudgy texture – this bar has compared to the fruit. Bear in mind, I’ve never had real cherry pie, so maybe cherry pies are this sour! It’s just not the flavor for me

Overall: 4/10. There are a lot of other choices I’d pick before I eat this one again.