PopChips says, “Introducing an all-natural chip like you’ve never tasted before. We don’t fry it (unhealthy). We don’t bake it (undelicious). We take the finest ingredients, like wholesome potatoes, apply heat and pressure, and pop! It’s a chip. Then we use an artful blend of natural seasonings for a snack so tasty, crispy and dip-able, you won’t even notice it’s (we hesitate to say) healthier.”

The awesome folks over at PopChips sent me two flavors to review along with a lovely hand-written note from Emma, their wonderful PR representative. (Thank you so much for that special touch!!) 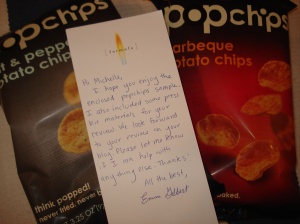 Just a little bit of info on PopChips: 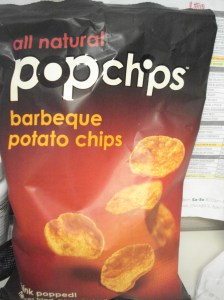 Here’s the BBQ flavor I had for lunch. Keep in mind…I’m a HUGE bbq fan, so I’m also slightly biased.

First Impression: They look a lot like the Genisoy soy crisps but not as flat! I also got a nice little whiff of BBQ smell when I opened the bag, but it was faint.   When I took them out of the package, I didn’t notice an over-abundance of seasoning clinging to my fingers (that I sometimes enjoy licking off from the Genisoy’s & BBQ baked lays), but I’m sure less salt and seaoning must be better for me! I feel healthier already!

Flavor: Very flavorful indeed – but very much like a “healthy” potato chip! They are seasoned just like your traditional BBQ chips, just without the greasy after-taste. It has a faint rustic smoky flavor with a sublte potato-flavor undertone. I totally get the BBQ flavor without the overly salty (like Lays baked BBQ chips). I’m still ambivalent about whether I like the “lack of” BBQ seasoning to lick them off my fingers, but it really is just personal preference.

Texture: Very crunchy, but not as crisp and “snappy” as regular potato chips. It is definitely NOT airy (like Quaker mini rice cakes), which I really appreciate because you actually feel like you’re eating a chip!

Overall: I definitely enjoyed the flavors and the texture of these chips! However, PopChips aren”t quite as bad for you as a reguar fried potato chip, yet it isn’t QUITE as good as soy crisps (I wish it were even lower in calories, though fat count is great). As a potato chip replacement, PopChips are terrific, but it wasn’t like I was reaching for the bag after polishing off my serving. Come to the think of it, it’s probably a GOOD thing that this is a non-addictive chip right?

For the lowdown on stats & other flavors, go to PopChips.

For the texture review, check out either the review from yesterday’s post OR my product reviews Popchips page!

First Impression: Since I already knew what it was supposed to look like (duh, I had BBQ yesterday), I took a good whiff as soon as I opened the bag. This is my favorite thing to do with new products! Smell them! It was FAR less “peppery” than I thought it would be, which is a great thing, because I expected it to overwhelm my senses.

Taste: I DEFINITELY enjoyed this flavor more than the BBQ! Which I didn’t expect because I’m such a huge BBQ fan. I can’t even explain what the perfect amount of pepper is, but this was it! Just enough to give the chip some punch, but not enough to make you cough. However, it was also much saltier than I like my chips.

The boyfriend (who is a big kettle chips & potato chip lover) really liked the Popchips. The most interesting thing about this chip is that you get that subtle potato flavor at the end of each bite, but when you first bite into it, all you get is crunchy salt & pepper.

The verdict is still…A GREAT POTATO chip replacer!! Don’t expect it to be the same texture as a potato chip though! Also, if you’re like me and just want a crunchy snack (and want lots of it) I find that soy crisps and 100- calorie pack popcorn gives me greater volume. 🙂