I took the bf on the Chicago Food Planet Food & Cultural Tour in Bucktown/Wicker Park for our 2 year, and it was Awesome!!!!!

Pros: Getting to learn all about mom & pop shops that serve up GREAT food, learning about the history of Chicago and its architecture from our savvy tour guides, and EATING at 7 cute, popular, and tasty eateries in 3 hours!!

Cons: I was still hungry after the tour! The weather was COLD to be outside for this long. Oh! And there were a couple complaints with the choice of eatery…read on to find out why? Now let the journey BEGIN!

Taste: According to the bf, it was AMAZING. He’s a dude who hates mustard and he downed his hot dog in 30 seconds. Since I don’t eat beef, I literally had a salad in a bun, but it was actually very tasty thanks to the fresh plethora of crunchy veggies!

Did you know there are over 2000 individually owned hot dog stands in Chicago???

Verdict: B+. We will eventually return…hopefully for some other form of protein inside my hot dog! There are just so many hot dog stand in Chicago there’s no need to go back to George’s. Right?

SURPRISE!! It’s a restaurants AND a dessert bar!

We sampled a home made marshmallow and the “Medium hot chocolate”. 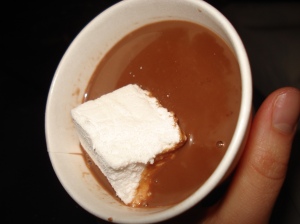 Taste: The marshmallow was soft and fully, while the hot chocolate was RIDICULOUSLY rich, as if someone melted a bar of milk chocolate into liquid form and stirred in half a cup of whole milk. WAY too sweet to me and quite a few others on the tour, particularly the men. hehehe Go figure.

Verdict: A-. The bf and I want to go back for the great looking menu and to try other desserts!

Gourmet Foods & Catering established in 2004 by an Australian lady who also owns Feast Restaurant in Chicago.

We sampled one of the best-sellers, which was their beet salad.I HAD high expectations for this and was unfortunately disappointed.

Taste: I didn’t finish mine. Even though I normally like beet salad, something about the beets was off. It was slightly bitter and the dressing used to coat the beets were a little too thick.

Score: B-. Um…I’m not going back for more salad but they had good lookin’ salmon and carry green tea sake, which I’ve never heard of!!!

Anyone watch Real World Chicago?? This is where the contestants lived! 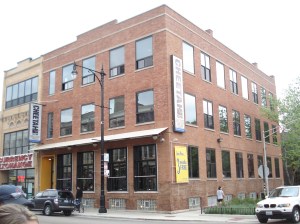 Apparently, MTV bought out the little coffee shops in the building to convert it into living space. Residents in the area were so afraid Real World crew would wreck their neighborhood that they were known to egg the contestants!

MY FAVORITE stop. A fabulous thin-crust Pizzeria and Brewery-pub (meaning they make their own beer in house)!

To start, they gave us CUUUTE shot glasses of cold, house-brewed beer. I’m not a fan of the bitterness in beer, but the bf said it was “good”. 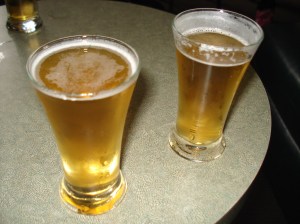 We tried their “white pizza base”, which is olive oil, garlic, Parmesan and mozzarella topped with basil and fresh tomatoes.

Taste: TO die for. I love thin crust pizza, and Piece has such fresh ingredients. I still can’t get over how delicious basil and garlic taste in a pizza. mmmmmmmm

Did you know that in Chicago, thin-crust pizza outsells deep-dish pizza by at LEAST 3 times??

Verdict: A. I’m totally coming back!

Liquid nitrogen-frozen customizable ice-cream anyone??? Nope, this ain’t iron chef, but the owner of iCream got her inspiration from Food Network’s very own Alton Brown!! 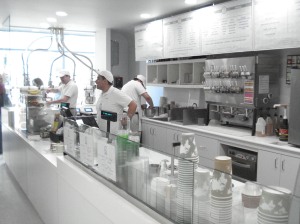 Check out the tentacle-like liquid nitrogen pipes they use to freeze the ice-cream liquids right before your eyes! Lucky us also got to meet the entrepreneur herself, who started iCream after her b-school prof told her she’d be crazy not to turn her business plan into reality! 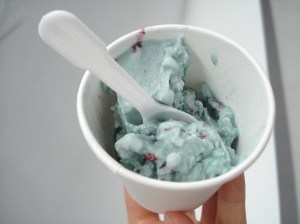 We tried a regular ice-cream with blackberries and injected with blue dye.

Taste: Not what I would have chosen, but the ice-cream texture is creamy and dense.

Verdict: B. I loved meeting the owner and I definitely want to return to make my own flavor combination (green tea!!) but the sample we got was just…not good.

My least favorite because we didn’t get to go in at all because of a lame reason – that we were going during peak business hours. UHHH when we went, the restaurant was half empty, while we GOT SEATS at Hot Chocolate and they were jam packed at 12:30!!!! LAME. 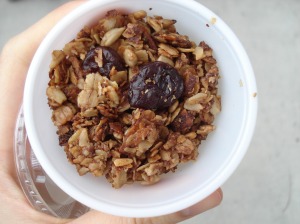 We tried a house-made granola with cherries, sunflower seeds, almonds, and coconut.

Taste: I have to give it to them. All the inredients were delicious, fresh, and crunchy. However, I don’t doubt that most of you food bloggers out there can make a comparable granola with the same inredients.

Verdict: B. Good tasting granola, but it’s just LAME to say you’re a “stop” on the food tour and then not bring us into the restaurant. I didn’t learn a thing about this business, plus I could have just bought the granola on my own!

Chocolate Lounge established in 2000 who has a fancy shmancy owner who is the #1 dessert chef pick by Chicago’s renowned Chef Charlie Trotter!

These chocolates were $2.50 a piece!! Danng…2 pieces of chocolate and you can buy a footlong at Subway. 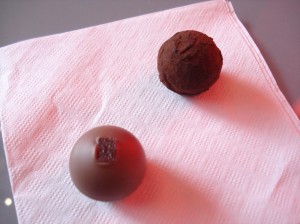 We tried a milk chocolate truffle and a dark chocolate, both with some UBER complicated ganache filling that the owner himself described for us in a 2 minute ingredient listing shpiel.

Taste: It was good, but that’s all I can say. As a chocolate lover, I prefer my Godiva and Ghirardelli’s hands down.

So there you have it. 3 hours of food from 7 different eateries!

I highly recommend these Chicago Food tours through Chicago Food Planet. Out of the two tours they offer, I prefer the River North/Downtown tour over this one. You learn a lot more and walk a lot more too!