Thank you for all your comments on my new place. 🙂 I never knew that living independently was so liberating!!

If you’re ever stuck in a sucky living situation, move out. IT WILL BE SO WORTH THE “TROUBLE”. And you’ll be SO happy!!

And so free to host guests and play “tour guide” any weekend of the year!!!

You get to eat multiple Chicago-style hot dogs at Portillo’s.

You get to take them to Navy Pier and sit on/take pictures on 33 ton anchors.

You also get to sample Soy Joy Bars when they are handing ’em out like free candy at the Pier! Contrary to many negative reviews, my experience with Soy Joy hasn’t been terrible at all. Click here if you want my full review!

To stuff yourself crazy with some of Giordano’s famous stuffed-crust Pizza – which my friend loved! I really can’t do deep dish anymore thanks to the many free pizza events in college. The cheese is overwhelming, but I could eat crust + sauce + mushrooms ALL night…too bad they don’t make pies like that.

We also went to Millenium Park to chill out with The Bean! You gotta look at this abstractly since we took a picture of our reflection on the actual bean itself. hehe Original, I know.

And last but not least, I got to review goodies with my friend Mo!!!! Mo arrived from California just in time to review some good old Newman’s Own Organic products with me (with MANY MANY thanks from Sally)!

Mo’s favorite were the Ginger Hermits – “an old-fashioned soft cookie”. The cookies are available in three flavors: Original, Cinnamon, and Ginger. 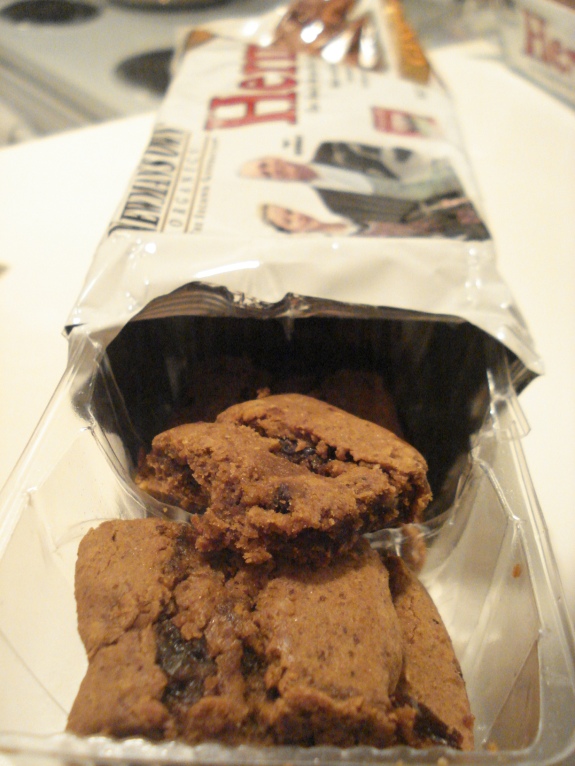 Flavor & Texture: A sweet, soft, slightly spicy (not really spicy but I like to think it is), cinnamon-gingerbread cookie studded with raisins. It’s the home-baked winter cookie we all love but without the greasy after-taste. *Warning* It is easy to eat more than 1.

What I thought would be my favorite…SOY CRISPS!

The Crisps come in four varieties: Cinnamon Sugar, White Cheddar, Lightly Salted, and Barbecue, and have between 7 and 9 grams of protein depending on the variety. Gluten free, they are made with organic soy and organic rice.

Flavor & Texture: Honestly, these are probably the least flavored soy or rice crisps I’ve ever had in my life. If you absolutely LOVE your seasonings, you won’t be too thrilled with the lack of cinnamon and sugar in this product. HOWEVER, that also means this is probably the most healthy cinnamon sugar soy crisp you will find on any grocery shelf. Texture-wise, they are light, crisp, crunchy, and pretty much exactly what you expect a soy chip to be like. (Think Glenny’s) Take my advice and eat it this way… 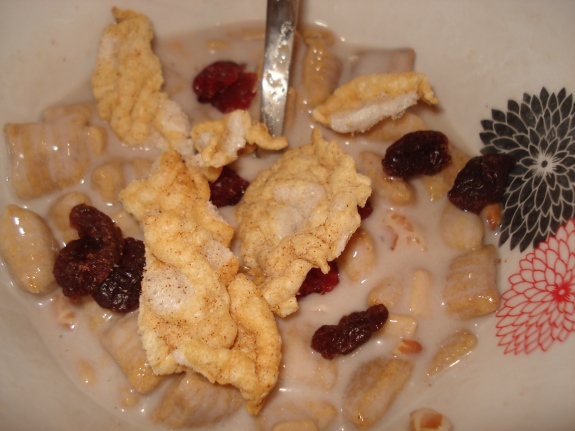 Though poorly incorporated in this picture, the cinnamon sugar soy crisp is DELICIOUS when mixed into a bowl of sweet cereal with dried mixed berries. Not only does it boost the flavor of the crisp, it also makes it less dry, yet still crisp. 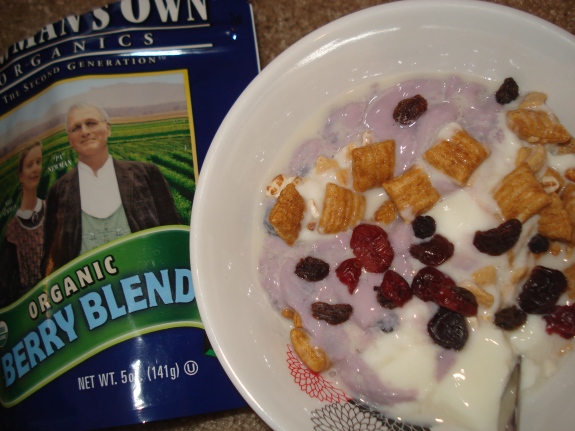 Prior to adding the cinnamon crisps, the cereal was combined with yogurt and the Newman’s Own Organic Berry blend! Review? Nothing special about these berries except once you mix dried berries into one package, they all taste the same….sweet and sour, YUMMY and very much like RAISIN (at least in this particular packet)! 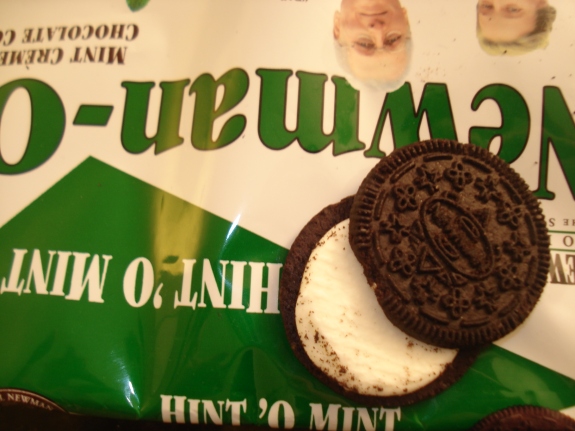 Flavor & Texture: The cookie itself was very Oreo-esque. Crispy, crumbly, semi-sweet (which I prefer to milk chocolate) but a little MORE on the powdery side. The filling was a fluffy creme that was lightly flavored with mint. JUST perfect enough to make mint oreo ice-cream that is. 🙂

Step 2: Pour that all into the ice-cream maker and begin to churn…

Step 3: Grind/smash/crush up as many cookies as you wish. Take out your days worth of stress while you’re at it.

Step 4: Pour cookies into the ice-cream batter 5 minutes before it’s ready to eat… 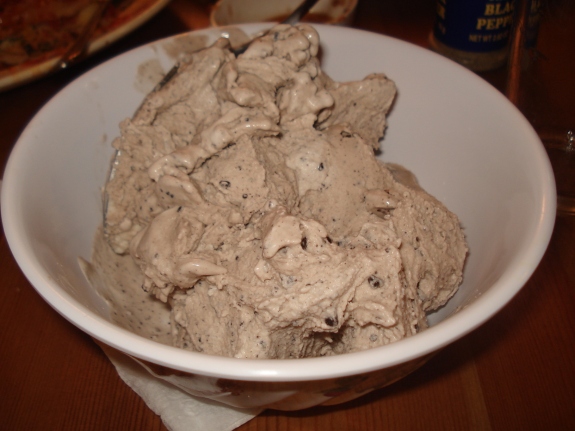 You have an egg-free home-made Mint Cookies ‘n Cream Ice-cream!!! 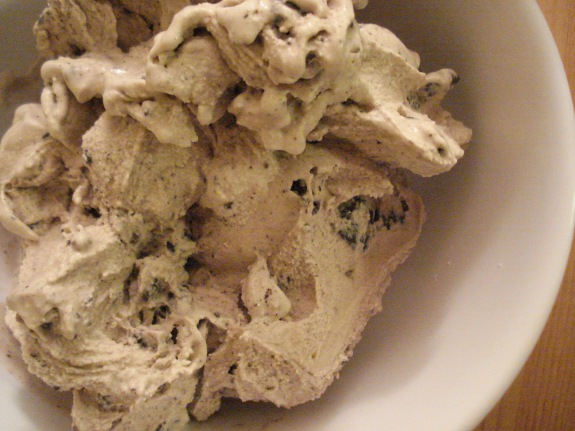 Review: This is seriously a DELICIOUS ice-cream that isn’t too sweet, nor overly minty. However, Nick and I agree that we’ll opt out of the heavy whipping cream and use half-and-half the next time we make this because of the oily invisible film this seems to leave on our lips. (we are ice-cream veterans, trust us!)

I just realized I haven’t given 2 readers those free ZenSoy coupons! Please leave a comment on this post to say you’d like one IF you commented on that particular post as well so I know you’re still interested. Sorry ladies!! I’ll let you guys know which 2 people get coupons in the next post. 🙂